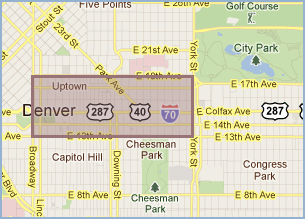 The Uptown neighborhood is located east of downtown, south of Whittier, west of City Park and north of Cheesman Park. Uptown is east of the city center in an area identified as Denver Southeast.

Homes For Sale in Uptown Denver

Depending on the source, the section of Uptown east of Downing Street is often called City Park West. However, for this description, both neighborhoods will be treated as a whole. Bordered on the north by 20th Avenue, Park Avenue and 23rd Avenue, on the east by York Street, on the south by Colfax Avenue and on the west by Broadway, Uptown homes for sale in Denver can be split into three architectural sections.    Read More...

Starting with the York Street mansions, the eastern section of Uptown is broad-shouldered Denver squares mixed with scattered Victorians and urban-chic condos. The middle blocks are mostly older Victorians and brick apartment buildings as well as Queen Ann’s with gorgeous, wrap-around porches. These first two sections share an aesthetic of canopied tree-lined streets, plots of grass and small front yards. In contrast, the western side of Uptown is almost entirely high-rises, parking lots and apartment buildings with more concrete and glass than trees and grass.

Bordered by major nerve centers like Colfax and Broadway, home to a commercial section of 17th and directly adjacent to downtown, the Uptown Denver neighborhood is an exciting place to live. For starters, try the historic Capitol Hill Book Store, the cozy Irish Snug bar and the chandeliered Fillmore Auditorium. For what Colfax lacks, “restaurant row” on 17th Avenue includes everything from Steuben’s eclectic lobster roll versus mac-and-cheese fare to the Thin Man’s fruit-infused vodka. Also, with close proximity to City Park and downtown, there’s something for the dog lover, the Rockies fanatic and all points in-between. Colfax, Park and 20th are all major thoroughfares leading to I-25, I-70 or both.

Due to its prime location, there’s constant happening in Uptown. New and updated residential towers spring up almost overnight, keeping the overall atmosphere of Uptown current and exciting. Search for available Uptown Denver homes for sale with the help of the Neir Team.  Show Less...

Exit Realty Cherry Creek
The content relating to real estate for sale in this web site comes in part from the Internet Data eXchange ("IDX") program of METROLIST INC® Real estate listings held by brokers other than Kentwood Real Estate, City Properties are marked with the IDX Logo. This information is being provided for the consumers' personal, non-commercial use and may not be used for any other purpose. All information subject to change and should be independently verified. Click here for the full Terms of Use.
Search All Area Listings
Advanced Search
Featured Communities
DENVER PROPERTIES
Residential
New Today
Price Reduced
Recently Sold