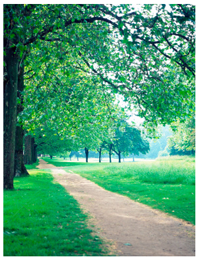 Some claim that City Park is the best park in Denver. It undoubtedly has the most things to do. Where else can you visit a city zoo, natural history museum, numerous lakes, a boathouse, and a golf course, all in the same park? Located in east-central Denver, this is

the city’s largest park. From almost anywhere in its 330 acres, one has views of downtown, the mountains, or both. It is also the starting and finishing points for dozens of races, including the Denver Marathon, home to a series of summer concerts, and contains brightly colored fountains. Homes near City Park range in styles and sizes, but they collectively create a beautiful and diverse place to live.

A favorite park of Denverites is the scenic Washington Park, “Wash Park” for short. Surrounded by an upscale neighborhood, this park is among the most prestigious in the city. Single-family homes in Wash Park are priced from the mid-$400,000s, all the way up to a $2 million. It is also the favorite park of outdoor

enthusiasts. Wash Park is surrounded by running and walking trails, one of which circles the perimeter of the park. It also holds tennis courts, croquet fields, two playgrounds, and a recreation center. The historic boathouse can be rented out for a variety of events, from weddings to banquets to company parties. Most would agree that Wash Park is the best park in Denver when is comes to beauty.

Finally, the third park that is arguably the best park in Denver is Cheesman Park. Surrounded by one of the oldest neighborhoods in Denver, Cheesman Park has a historical tone. In the 19th century, the land under the park was used as a cemetery. But as the growing population cried out for more amenities, the city

converted the cemetery into a park. Today, Cheesman Park houses the famous Denver Botanic Gardens and Cheesman Pavilion. The homes near Cheesman Park are historic and full of character, fronted by tree-lined streets and shady sidewalks.

It is hard to say what the best park in Denver is, as there are too many beautifully decorated and historically rich parks to count. We have narrowed our list down to three, but what is your favorite?