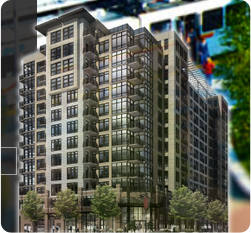 Cadence is the first high-rise apartment building in the new Union Station redevelopment field.  It is a 13-story apartment tower with 220 units that is leading the charge of truly transforming the Union Station neighborhood.  It has a very unique design, with a facade that differs in both shape and color between both ends and has multiple setbacks throughout the length of the building.  The 17th Street Gardens are just to the north providing a great public space and a clear path to get through the Union Station neighborhood.  At street level, Cadence has a very inviting main entrance with great ground floor retail presence.  It address is 1920 17th Street. 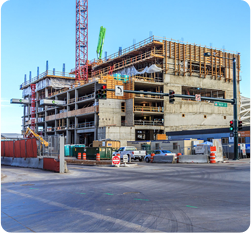 Across the street from Cadence will be another high-rise 21-story, 288 unit building, next to the commuter rail train hall, called The Platform.  It’s address is 1650 Wewatta, and this new building will be taller than both the canopy at Union Station and Cadence.  It will be the overall tallest tower in the Denver Union Station redevelopment! 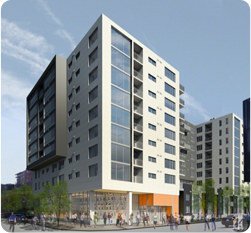 Image courtesy of the Opus Group

Also know as “Verve”, the 10-story building that houses the Delgany Apartments, is a little tucked away from the Union Station redevelopment area.  The building will feature mostly blonde brick with floor-to-ceiling windows in various sections of the building.  This project will be completed late spring, will add a total of 284-rental units to the neighborhood, and will be located at 1490 Delgany Street.  Of all the new developments in Union Station, this one will be the most luxurious, with granite countertops, stainless steel appliances, balconies with mountain views, a fitness center and pool. 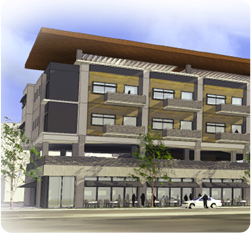 Image courtesy of the DenverInFill

There is also a 108-unit affordable housing project planned for the Union Station district.  Located at 1975 18th Street, this building will occupy the southeast side of Chestnut Place between 18th and 19th streets just a block from the Union Station transit center.  The development will share the block with  the existing steam plant and a triangular parcel slated for development as possibly an office building or a hotel.  Construction will begin in June 2014 with completion in September 2015. 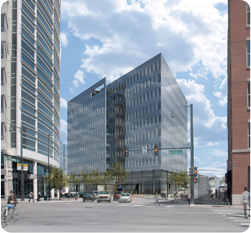 Image courtesy of the DenverInFill

Just when you thought there was enough construction activity in the Union Station neighborhood, dirt is starting to move on the old Triangle Building site too at 16 Wewatta.  With this soon-to-be new building, there is an additional 288 residential units going up within the radius of a single block!  Completion of this project in slated for May of next year. 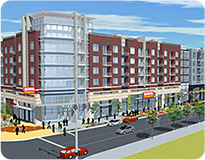 Image courtesy of the Elan

Last but not least, the structure of Elan at Union Station, formally known as 20th and Chestnut, has also broken ground.  The ground floor of Elan at Union Station is going to house Downtown Denver’s first full service grocery store, and instead of the standard floor-to-ceiling height used in apartments, approximately 10 feet, the ground floor will have a floor-to-ceiling height of 28 feet. Because of that, the building will have the presence of a 7-story building while still only rising 5-stories.  Amazing!!