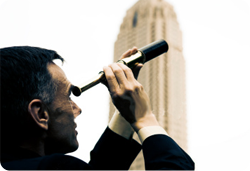 If you have never seen Jim Paulsen speak, he is very dynamic and supports all his predictions with straightforward market data condensed down to show trends over the last 50 years.

The meat of his outlook centered around a concept he coined as “The Gear Year”.

The Gear Year is the year following a recession where growth returns to the economy. Prior to the 1980’s when an economy moved out of recession, confidence returned quickly followed by immediate job creation. That trend has slowed considerably since the mid 1980’s. What we see today - as our economy moves out of recession it takes 4 years for confidence to result in job creation. The 4th year is “The Gear Year”. Jim predicts that 2013 is the US economic Gear Year. Every economic recovery since the ‘80s has shown this trend and has resulted in a slow starting and long lasting recovery. Jim’s predictions are for a 10 year recovery period with a growth rate around 3%, hinged upon inflation.

Delayed and sustainable economic recovery predictions were backed up by following 10 proof points.

Jim summed up this portion of the forum with the prediction that this recovery is going to be dramatically different from any previous recovery and will be much more sustainable and less sensitive.

Other predictions from Jim include: