We need a way to determine if this new transportation hub, opening in our back yard, will have an impact on property value.   The term “Transit Premium” has been established for just this purpose and is defined as the value added to property by proximity to high capacity transit. A report prepared by Reconnecting America for the Federal Transit Administration studied high-capacity transit in Washington D.C., Dallas, San Diego and Portland. They concluded that not only does viable high-capacity transit spur robust development but also has a significant impact on Transit Premium. The following was pulled from the report. 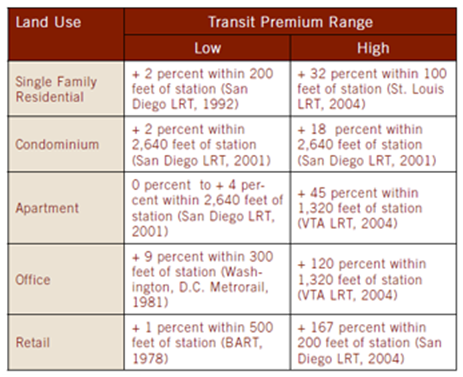 This particular report focused on property within a very close proximity to transit stations.

Analysis of property values surrounding the Metrorail in Miami-Dade County between 1971 (13 years before the line opened in 1984) and 1990 revealed a 5% higher rate of appreciation compared to the rest of the City of Miami.

A study of the Eastside Metropolitan Area Express (MAX) light rail line in suburban Portland uncovered, on average, 10.6% greater value for homes within 500 meters (1,640 feet) of transit. The study attributed the gains to homes within walking distance of the station. The study also noted that nuisances such as noise and traffic reduced property value impacts on properties closest to the station.

Analysis of 5 rail systems in California including San Mateo County, San Francisco, San Jose, Sacramento and San Diego concluded that systems with the highest ridership rates and locations access experienced the most significant association between station distance and value.

The primary positive impact of rail on property value is accessibility. It’s been determined that properties within a limited distance of transit stations achieve the most positive effects. Distance is generally defined as a walk of one quarter to one half miles. Beyond this zone the effect on property value is less significant.

Given the research presented here it’s not unreasonable to expect the same thing to happen in Central Park. I argue that the positive impacts of Central Park Station will be significant.  Not only is Central Park directly linked to Denver International Airport and downtown, the I-225 Line will then link the neighborhood to the Anschutz Medical Campus. Other lines slated by FastTracks make Central Park very accessible from the entire city and make the neighborhood extremely desirable.