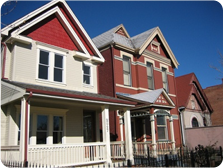 Very few of Denver’s many neighborhoods have the rich, historical flare that can be found in Five Points. The streets are lined with mature trees, classically designed homes, and parks that have stood the test of time. Although it has had to endure the label as one of the city’s rougher and lower-end neighborhoods, Five Points is making a strong comeback, showcasing its new and improved Five Points architecture: a co-mingled blend of historical charm and modern convenience.

Five Points is located just east of downtown and houses one of Denver’s fastest growing areas, Curtis Park. Five Points has an interesting and well documented jazz history. Musical greats like Billie Holiday, Miles Davis, and Duke Ellington have played local clubs, including the Rainbow Room and the Rossonian. Locals know that the best Caribbean, soul, and barbeque can be found in many of Five Points’ local eateries and undiscovered gems. 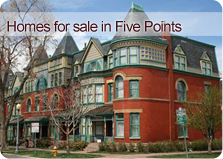 As downtown continues to reach east, Five Points is first to change. Homes that have existed since the turn of the 20th century are being torn down in favor of more expensive, more appealing buildings. Some may worry that Five Points is being robbed of its identity, while others claim that by opening up the neighborhood to outside homebuyers, more are able to contribute to this historical melting pot. Whatever the answer is, Five Points architecture is experiencing a modern shift that is mixing together a great blend of Denver’s vast cultures.